From time to time, I like to take a look at data I’ve collected about quarterbacking in the NFL. Examining these statistics is like a history lesson. You can view league totals and averages and see exactly how play-calling has evolved over the years.

I’ve put a lot of that work into a spreadsheet that has bits and pieces of demographic information. I haven’t proofed it against the major databases, but it is a fairly complete list of every game played in the NFL (regular season and playoffs) since 1974, when the rules were changed to open up the passing game.

This post is just a piece of that data – an attempt to show the last college attended by quarterbacks who have won games as starters in the NFL. This includes 144 colleges and more than 11,000 wins. No analysis here – it’s just a list, heavily skewed by the Hall-of-Fame level quarterbacks who add the most to the totals. I thought it would be interesting as discussion continues as to whether there will be a 2020 college football season. 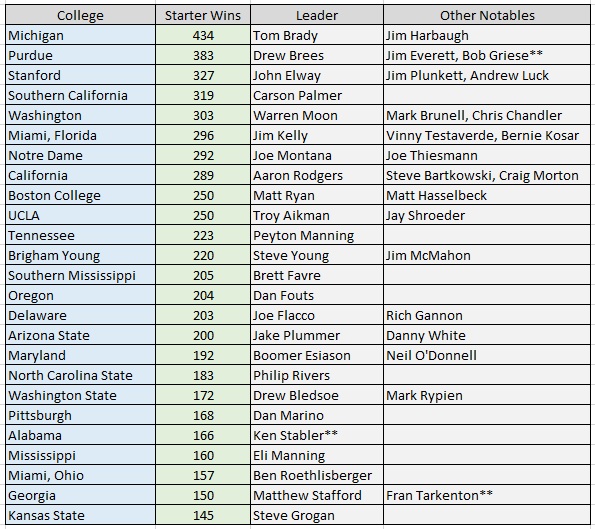 ** – Quarterback had a significant portion of his career prior to 1974, which is not included in the total

I know people will ask, but I have no news regarding the future of Front Office Football. I believe I am close to a decision, and will post this information soon. If I don’t have anything to update by the end of September, I will post again at that point regardless.